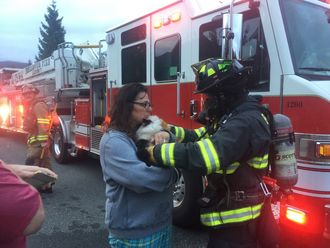 The city is building a new fire station to better serve residents in the Northwest Bellevue, downtown and BelRed areas. Fire Station 10 will improve response times for fire and medical emergencies in those areas, where the growing number of high-rise structures include “vertical response time” to upper floors.

Permitting and Design in Progress

A virtual public hearing is scheduled for April 15, 2021, to discuss the Decision and Hearing Examiner's Recommendation on this project. The public may participate in the hearing by either submitting written comments or by joining the hearing remotely to provide oral comments. The public was given notice of the Decision and the public hearing in the March 25, 2021, Weekly Permit Bulletin.

The Development Services Department held a virtual public meeting on Aug. 6, 2020, to allow comments on the Notice of Application for Fire Station 10. Comments were accepted through August 13, 2020. The public was given notice of the Application and public meeting in the July 30, 2020, Weekly Permit Bulletin.

The City of Bellevue held the Fire Station 10 Design Open House in late June/early July to solicit input on the new fire station. Participants gave feedback on the station's conceptual design and other concerns they might have regarding the project.

Community members attended an open house at City Hall on Jan. 23, where visual displays were available, as well as a chance to speak with staff and consultants. Fire Chief Jay Hagen gave a presentation, which was followed by a "question-and-answer" session with subject matter experts. Members of the community had great questions and feedback. For more information, please email FireStation10@bellevuewa.gov or contact project manager Marina Stefanovic, 425-452-4486.

Why does Bellevue need a new fire station?

Downtown has been Bellevue's fastest growing residential neighborhood for more than a decade, with the population expected to nearly triple from 7,147 in 2010 to 19,000 in 2030. Bellevue’s employment base, with the highest concentration of workers downtown, is also projected to grow from 42,525 employees in 2010 to an estimated 70,300 by 2030. BelRed, northeast of downtown, is also growing, with transit-oriented development drawing people and businesses there.

The areas of downtown and BelRed represent 70 percent of the projected population growth for Bellevue.

From 2010 to 2015, emergency incidents downtown increased by 24 percent. Travel time (time the apparatus is on the road) of three minutes to high-rise and four minutes to non-high rise incidents is critical to saving lives. There are gaps in meeting the three-minute travel time to incidents in Northwest Bellevue, downtown, BelRed and Wilburton.

A geographic area was selected for Fire Station 10 after based on coverage gaps identified in the Fire Facilities Master Plan. The 112th Avenue site was selected because it best met the following criteria used to evaluate potential sites in that area.

Benefits Beyond Downtown and BelRed

A systemwide support network of existing stations ensures every individual receives the same standard of excellence, no matter where they might live or work. Any current response into downtown can draw fire apparatus and crews from other fire stations, increasing response times to the neighborhoods where those stations are located,

Fire Station 10 will not only provide critical services for downtown, BelRed and the surrounding neighborhoods, it will also allow the other nine fire stations to better serve their neighborhoods by reducing the amount of time spent away from their primary response areas.

Reduced stress on the entire system allows for better service and, most important, better response times.