This park will be closed from date to date. TEST TEST TEST.

THIS IS A TEST ALERT AND SHOULD APPEAR ON PARKS PAGES.

To better serve our community's need for more theater space and address other issues, the city has constructed a new theater in Crossroads Park. The $8.8 million facility offers versatility of use and environmentally-friendly features. Video of theater

Founded in 1990, the Bellevue Youth Theatre has grown into one of the Parks & Community Services Department's most popular programs. The theater presents 10 productions each year, entertaining thousands, and provides summer and school-break day camps and theater classes.

In 2001, under an agreement with the Bellevue School District, the theater was relocated from Crossroads Community Center to a portion of the former Ivanhoe Elementary School. BYT soon outgrew the Ivanhoe facility, and in 2005 plans were developed to renovate the school for the theater’s needs.

However, renovation was estimated to cost approximately $2 million, with roughly half the costs needed to address building code upgrades. Escalating construction costs since 2005, together with changes to the building code, combined to increase the estimated cost of expansion at Ivanhoe to nearly $3.5 million.

The high cost, coupled with limited expansion capabilities at Ivanhoe, and the fact that the city did not own the Ivanhoe site, prompted staff to explore other expansion alternatives through a site and building feasibility study. Multiple options and locations were examined before determining that constructing a new theater at Crossroads  Park made the most sense. Existing land ownership and the adjacent community center allows the two facilities to share existing parking and programming opportunities, resulting in a smaller theater footprint.

The new 12,000-square-foot theater includes a flexible black box theater-in-the-round that can be configured to accommodate between 100 and 150 seats. Support facilities include a box office, lobby, "green room," rehearsal space, storage and outdoor theater capabilities. The new facility is integrated into the park with a green roof providing a natural insulator, resulting in significant energy savings while limiting the impact of stormwater runoff. The facility is be fully accessible and designed to meet LEED (Leadership in Energy and Environmental Design) Certification standards. 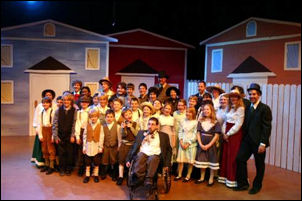 The new theater will allow the BYT to continue to serve the community for many years to come.