The Downtown Park and its Inspiration Playground opened on June 28, 2017. Come enjoy the park and playground!

Construction began on both the Complete the Circle and Inspiration Playground projects on July 11, 2016. 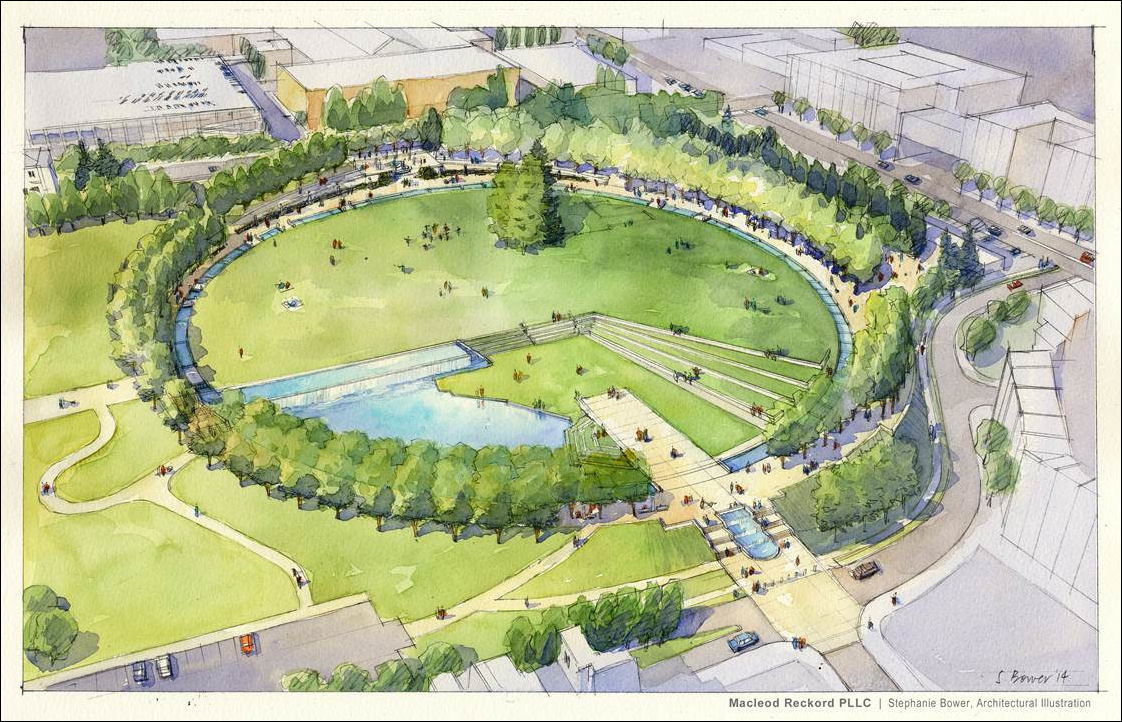 Construction was complete in June 2017.

From the initial Downtown Park (DTP) international design competition and 1984 DTP design adoption, through two initial phases of construction, and a master plan update in 1997 - the DTP has become one of the most recognizable and well-used places in Bellevue's park system. Large events are successfully held at the DTP, and the open nature of the Park allows for both passive and recreational amenities.

While the DTP has become a highly popular park, the circular promenade and entry remain unfinished. The unfinished portion of the circle currently functions as a vehicular entrance and parking area, and a portion of the area identified for expanded parking along the west edge of the park is occupied by the Ballet Arts building. Additionally the existing playground, which includes an adjacent parking lot and restroom, is among the most popular playgrounds in the community.

In a demonstration of support, the citizens of Bellevue passed the 2008 Parks & Natural Areas Levy, including the additional phase of the DTP master plan, "Completing the Circle."

On March 26, 2015, an open house was held at City Hall to share the designs for the DPT with Bellevue residents. The informational tables/stations were divided into five areas:

Each of these stations included design boards displayed on easels and a table with drawings on which attendees could make comments. Representatives from the Parks Department and the design teams provided information, answered questions, and recorded comments from attendees. Comment cards were also available.

The open house format allowed people to come at a time most convenient for them. Over 80 people attended the event, and many comments were recorded.

Changes Coming to Your Downtown Park

The Downtown Park has become one of the most recognizable and well-loved places in Bellevue, and plays a pivotal role in making downtown Bellevue an appealing place to live, work and play.

The Bellevue City Council took a bold step in 1984 by adopting the Downtown Park Master Plan. Since then, the city has worked to fulfill the vision of that plan, completing two major construction phases. However, the distinctive circular promenade and entry at 102nd Avenue NE remain unfinished, currently functioning as a temporary vehiclular entrance and parking area. In 2008, Bellevue voters passed the Parks & Natural Areas Levy that included funding to complete the circular promenade and canal, a major entry at 102nd Avenue NE, and relocation of parking to an expanded parking lot off of 100th Avenue NE.

Additionally, the existing playground will be expanded through a partnership with the Bellevue Rotary. Known as the Inspiration Playground, it will retain the popularity of the existing playground with an added focus on inclusive, accessible play opportunities "dedicated to fun, imagination and learning, where all ages and abilities play and explore at their own pace."

The city has contracted with MacLeod Reckord Landscape Architects for design and engineering services for the project. Construction is tentatively scheduled to start in the summer 2016 and last approximately a year.

In the early 1980s, shortly after acquiring property from the school district, the city conducted an international design competition for Bellevue Downtown Park. A park committee judged 67 entries and selected a concept submitted by the firm of Beckley-Meyers. Elements of the Beckley-Meyers design included:

In 1984 the City Council approved a Downtown Park master plan, which incorporated the Beckley-Meyers design and laid out several phases of construction for developing the park. Parts of the plan, including the circular promenade, were not completed. The unfinished portion of the circle functions as a vehicular entrance and parking area. Additionally, a portion of the area identified for expanded parking along the west edge of the park is occupied by the Ballet Arts building, which has been rented to a local dance troupe.

In 1997, confronted with a variety of competing interests for Downtown Park, the city was compelled to conduct a public process to determine if the master plan still met the city's needs. Although some details were modified, the 1997 Master Plan Graphic and Report retained and reaffirmed Downtown Park's design and purpose.

In 2008, Bellevue citizens passed the Parks & Natural Areas Levy that approved funding to complete additional phases of the Downtown Park master plan, including completion of the circular promenade, entry and water feature. The scope of work for this contract includes the design, public outreach, permit assistance and construction assistance for: