The Eastrail, is being developed as an uninterrupted, 42-mile multi-use trail extending from Gene Coulon Memorial Beach Park in Renton, north through Bellevue, to Woodinville and the city of Snohomish in Snohomish County. Other nearby sections include the Cross Kirkland Corridor and the Redmond Central Connector.

Formerly known as the Eastside Rail Corridor, the Eastrail corridor was previously owned by the Burlington Northern Santa Fe Railway Company. Today, King County owns just over 16 miles of the Eastrail, including most of the seven-mile section that runs through Bellevue. Approximately 1.5 miles of that section opened in the north part of Bellevue in 2018 as an interim, gravel trail for pedestrians and bicyclists and 2 miles of paved trail opened in the south part of Bellevue in 2021. Other segments of the Eastrail are in various stages of development.  The King County project webpage has more information about the entire project and offers the option to sign up to receive trail updates. The Eastrail Partners website has an interactive map showing completed segments, trail surfacing, access points, and amenities. 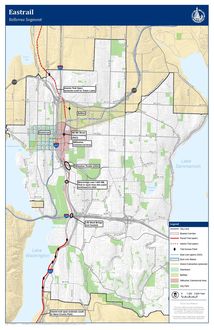 Although Bellevue is not an Eastrail owner, the city has a keen interest in both the development of a high-quality pedestrian and bicycle trail and in preserving its potential for additional transportation and utility uses. The city is working to advance the trail by supporting its design and development of key trail crossings and connecting links.

Since 2013, Bellevue has taken part in a regional planning process with King County and other Eastrail owners including Kirkland, Redmond, Woodinville, and Sound Transit through a Regional Advisory Council. In addition to Bellevue, non-owner jurisdictions on the advisory council include Renton and the Eastside Greenway Alliance, a coalition of seven community non-profit organizations interested in supporting development of the corridor.

Active freight rail service on the Eastrail south of Woodinville ended in 2008. King County holds a continuous trail easement along segments that are owned by others. Sound Transit owns a 1.1-mile segment of the corridor in Bellevue near the Spring District and holds an easement for transit along other segments.

Puget Sound Energy also holds an easement for utilities along the corridor. Redmond, Kirkland, Woodinville, and Snohomish County own corridor segments north of Bellevue. The corridor is “rail-banked,” which means that it must be preserved as a continuous route and there is the potential for reactivation of the corridor for freight rail under certain circumstances.