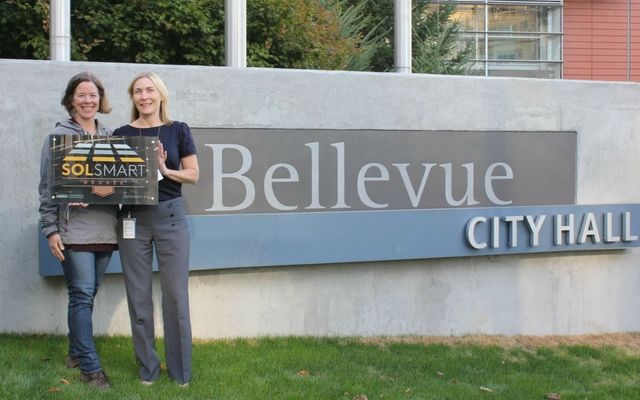 The City of Bellevue has been awarded a bronze designation from the national SolSmart program for making it faster, easier and more affordable for homes and businesses to go solar. The honor recognizes the city for taking bold steps to encourage solar energy growth and remove obstacles to solar development. For companies looking to expand, a SolSmart Bronze designation is a signal that Bellevue is “open for solar business.”

“Our goal has been to support solar energy by utilizing a simple, consistent solar permit process for residents and businesses,” said Heidi Bedwell, environmental planning manager for the city’s Development Services Department. “It’s been an ongoing process, but Bellevue has been able to help cut the cost of solar and make it a more viable clean energy option.”

To receive the designation, cities and counties make changes to their local processes to reduce the time and money it takes to install a solar energy system. This includes evaluating local permitting processes, as well as planning and zoning procedures. SolSmart designees also develop innovations in areas such as market development and finance.

SolSmart is led by The Solar Foundation and the International City/County Management Association and funded by the U.S. Department of Energy SunShot Initiative. More than 100 cities, counties and small towns have achieved SolSmart designation since the program launched in 2016.

SolSmart uses objective criteria to award communities points based on the actions they take to reduce barriers to solar energy development. Communities that take sufficient action are then recognized. As part of the SolSmart program, a team of national experts provides no-cost technical assistance to help communities achieve designation.

Bellevue’s SolSmart recognition builds on the city’s accomplishments in promoting solar by participating in the U.S. Department of Energy’s SunShot Initiative in 2012, earning recognition through the Evergreen State Solar Partnership, and collaborating with Sparks Northwest (formerly Northwest SEED) on two Solarize campaigns in 2014 and 2015, which resulted in the installation of 88 solar arrays in Bellevue.

Bellevue’s involvement in encouraging solar and other clean energy solutions is part of the Environmental Stewardship Initiative, through which the city coordinates and manages a range of programs aimed at protecting the environment.