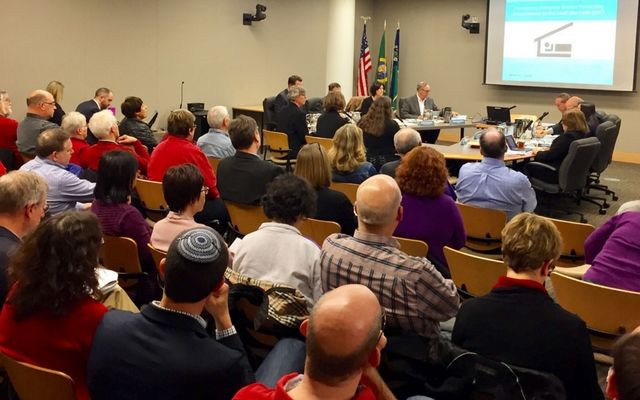 During the City Council’s study session Monday evening, councilmembers discussed a public engagement strategy for the permanent shelter Land Use Code amendment (LUCA) process. To gather broad feedback, the city is encouraging residents to take a short survey and attend a workshop at City Hall on April 3. The update also included a compilation of information prepared to date on the seven publicly-owned sites that have been identified as potential locations for an Eastside men’s emergency shelter.

Earlier this year on Jan. 24, councilmembers voted unanimously to renew an emergency ordinance (known as an interim official control) that outlines the permitting process required to establish a homeless shelter in Bellevue. As a result, a conditional use permit continues to be required for shelter uses. The interim ordinance was first approved on Aug. 7, 2017 in response to feedback from the community and concerns voiced by councilmembers.

During Monday’s meeting, Mayor John Chelminiak reiterated the City Council goal of developing a LUCA for adoption by the August recess. Throughout the discussion, councilmembers thanked the community members for their involvement in the shelter topic and emphasized the need for broad public outreach and engagement in the LUCA process.

The survey is now online and residents are encouraged to participate. It will close at 5 p.m. on March 21. A community workshop, which will touch on feedback gathered from the survey and offer residents another opportunity to weigh in, will be held on Tuesday, April 3, 5:30–7:30 p.m. at City Hall.

Later during the regular session, the council unanimously approved updates to the city’s local building and fire codes. Key changes include:

One provision, presented at the Jan. 16 study session, requiring high-rise buildings to have a “qualified building representative” to be available to the Fire Department during an emergency was not included in the update. The Fire Department will continue working with building representatives to advance this initiative and may revisit this subject with council in the future.

The new updates, including the fireworks penalty increase, go into effect on April 9.

The council also approved the 2018 Administrative Budget and Work Program for A Regional Coalition for Housing (ARCH) and the organization’s proposed annual allocation of city funds for local affordable housing projects. ARCH is a partnership of King County and Eastside cities that have joined together to assist with preserving and increasing the supply of housing for low– and moderate-income households. Bellevue has been a member of the organization since 1992.

As part of ARCH’s interlocal agreement, all member city councils must approve the organization’s budget, work program and funding for specific projects. Bellevue will provide just over $1.8 million, or about 33 percent, of the $5.45 million overall funding provided by Eastside cities. This covers four projects with nearly 400 beds and units for families and the homeless. Highlights for the year include partial funding for the Kirkland family and women’s shelter, and the affordable housing apartment developments known as Trailhead in Issaquah and Esterra Park in the Overlake area.

More background on the projects is available in the agenda packet materials.