The park is open for your use! Thank you for your continued patience as we work to make some final repairs and adjustments.

The new park features a "Great Lawn" ringed by a pedestrian path, playground, sport court, picnic shelters, a restroom and parking. Berms and lookouts provide territorial views toward Mount Rainier and opportunities to watch East Link trains when they begin running. A large meadow area offers space for pickup soccer, throwing a Frisbee or picnicking. The transformation of the 10.5-acre property at 11177 SE 4th Street follows acquisition from the county in 2005, the adoption of the final master plan in 2015 and construction in 2018. 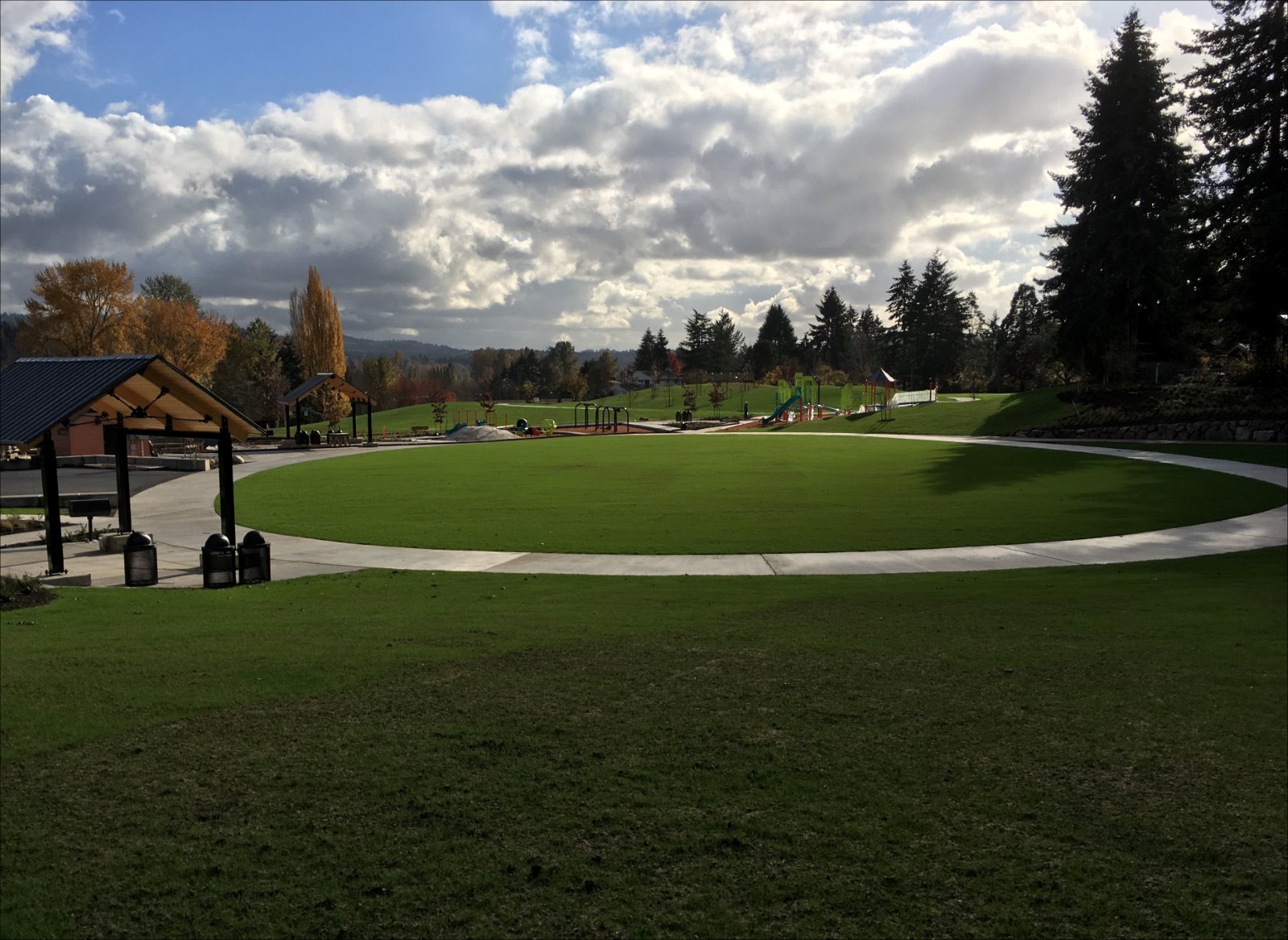 View of the Great Lawn area from the north pedestrian entrance.

Construction of the light rail began in earnest in Spring 2017; the guideway is being built along 112th Ave. Southeast adjacent to Surrey Downs Park.

View the animated video of East Link or visit the project web page.

For questions about East Link, contact Sound Transit at 206-398-5465 or eastlink@soundtransit.org.

The Surrey Downs Park master plan was planned with the help of our larger City community, the Surrey Downs neighborhood and the Parks & Community Services Board, and was adopted by the City Council on Nov. 16, 2015 as Resolution 9012. 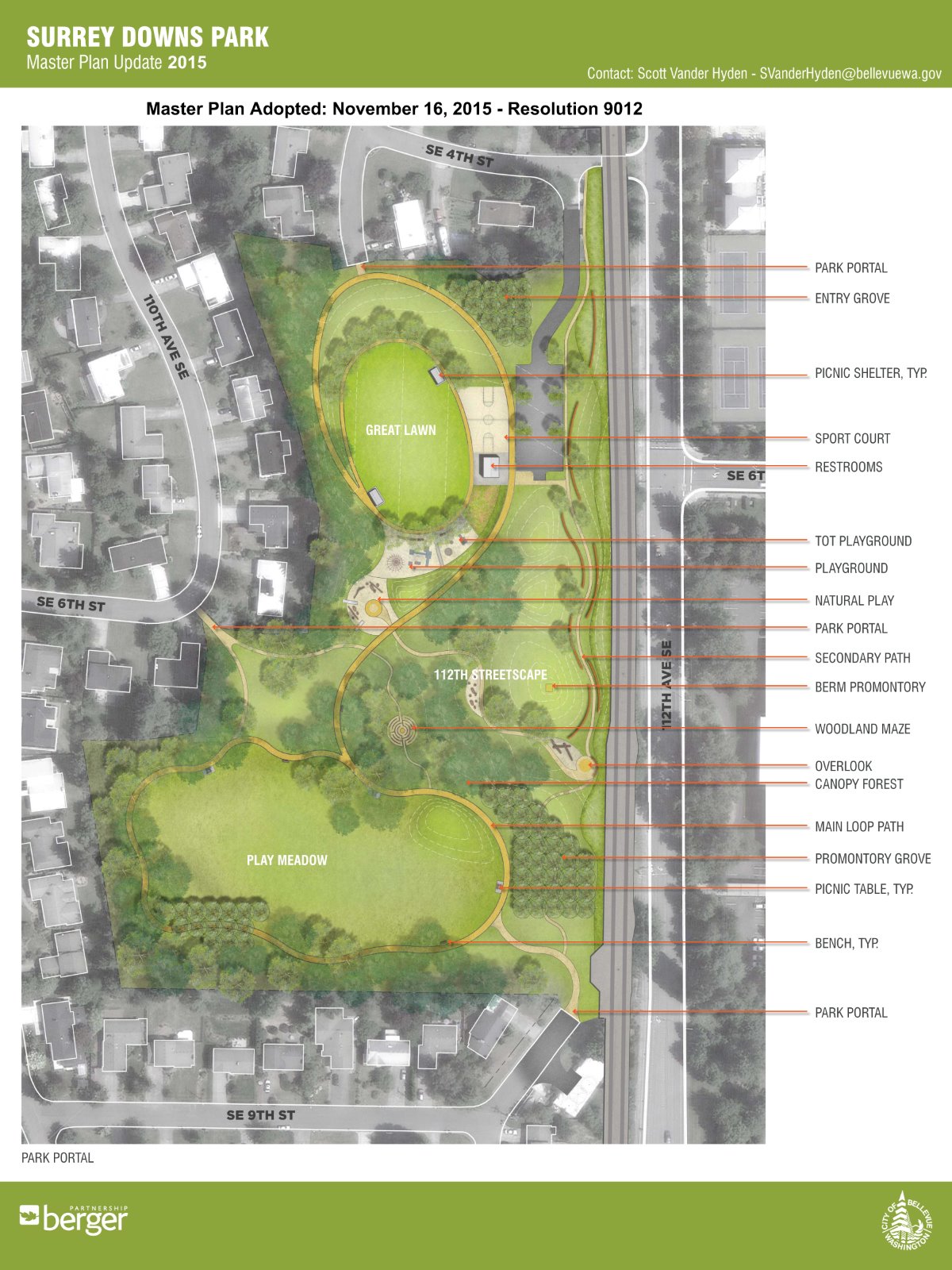 The Great Lawn, shaped by the existing topographic bowl in the park's northeast corner and ringed with a pedestrian path, will function as the heart of Surrey Downs Park. Elements of the Great Lawn will include picnic shelters, a sport court, restroom facilities and a playground.

The Play Meadow will provide a flexible space for numerous activities such as throwing a Frisbee to pick-up soccer games. A loop path with bench seating and picnic tables will border the meadow.

The eastern edge of the park along 112th Avenue Southeast will offer a series of large, sculpted landforms. These earth berms will direct views outward and provide a strategic buffer from the Sound Transit trackway. Terraced walls will break down the overall elevation and carve out planting spaces that can be enjoyed from both sides of the park border.

Sound Transit's light rail alignment prompted an update to the 2009 Surrey Downs Park master plan. The light rail trackway will prohibit community access to the park from 112th Avenue Southeast. The only vehicular entry into the park is from within the Surrey Downs neighborhood at Southeast Fourth Street.

Key updates to the master plan reflect the reduced park access and the less intense planned use more typical of a neighborhood park. Updates to the Surrey Downs Park Master Plan included: 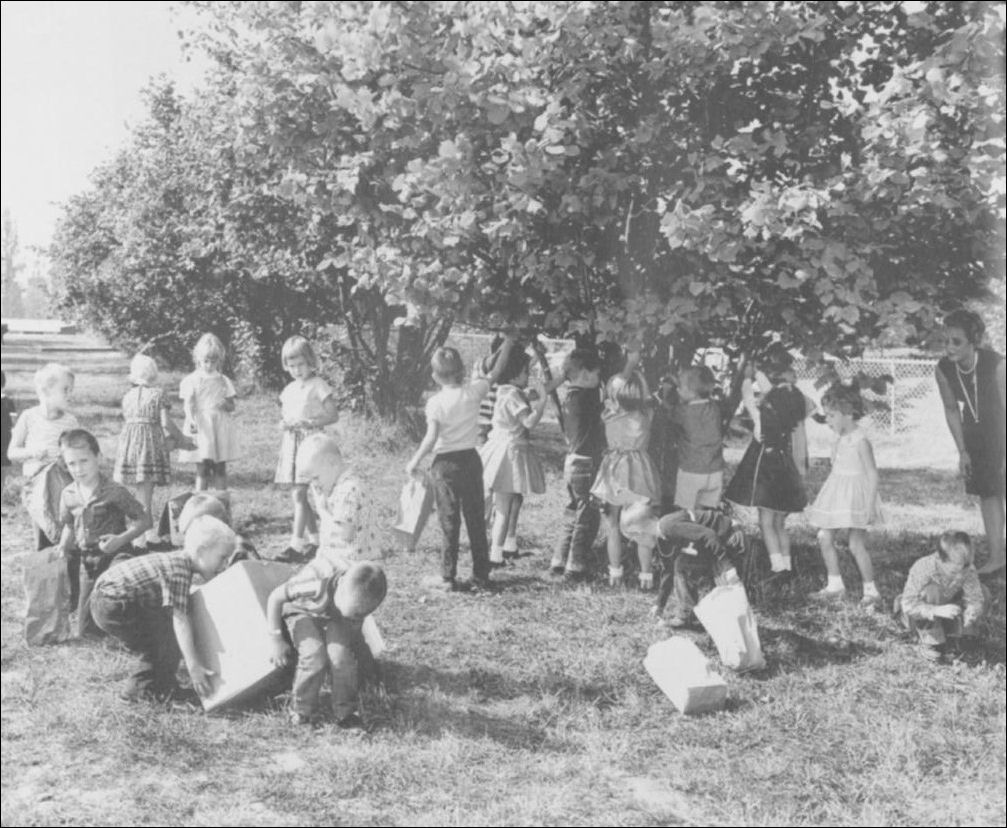 1936 aerial photo showing the Filbert Tree Orchard that was once a part of the R.T. Reid Fruit and Flower Farm. Parcel and street overlay provides 2017 park and neighborhood context. 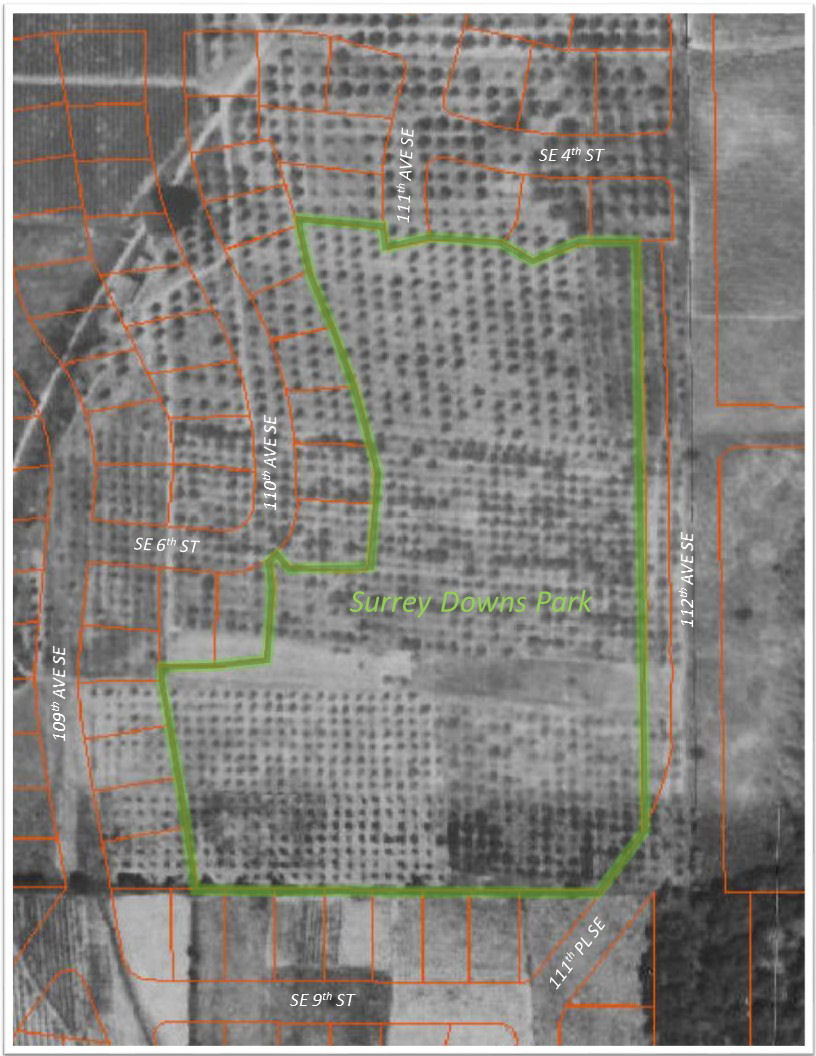