In spring 2016, the city began working with affected neighborhoods in helping to identify traffic mitigation tools and locations to lessen traffic impacts due to East Link light rail construction on Bellevue Way Southeast and 112th Avenue Southeast. Construction involves utilities work in the roadway, building the station, guideway and garage and other associated construction. Bellevue Way Southeast is a major arterial serving downtown Bellevue and the neighborhoods south of downtown. It is a key connection for commuters entering and exiting Bellevue via I-90. When traffic becomes congested, typically southbound during the afternoon commute, some drivers bypass the congestion by using 108th Avenue Southeast and other neighborhood streets.

The NTMC was extremely sensitive to recommending mitigation that is intended to discourage commuter traffic and recognized how mitigation also impacts residents. While the pilot restrictions came with changes for residents in accessing their neighborhoods, the intent is to discourage commuter traffic from using neighborhood streets to reach their destination.

In response to concerns for increased traffic within neighborhoods during East Link light rail construction occurring on Bellevue Way Southeast and 112th Avenue Southeast, a pilot traffic mitigation program was implemented at Southeast 16th Street and 108th Avenue Southeast and Southeast 16th Street at Bellevue Way Southeast discourage evening traffic in neighborhoods. The original pilot was launched in Sept. 2017 and modified in Jan. 2018. Due to their effectiveness and community support, the following turn restrictions are now permanent, effective March 2021. 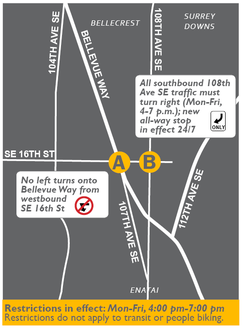 The pilot was developed in collaboration between the NTMC and the Bellevue Transportation and Police Departments. The city has continually evaluated the pilot through traffic volume studies, operations, and community feedback. Data from an Oct. 2018 study shows continued decreases in traffic volumes from when the pilot turn restrictions were originally implemented.